“You’ve got to keep the child alive; you can’t create without it.” ~ Joni Mitchell

Women’s History Month takes place in March, and allows us to celebrate the contribution and achievements of women throughout history to the present day.  I wanted to honour the work of some highly creative Canadian women I admire, for their music, their art, their poetry and their stories.  I found some wonderful picture books that give children the opportunity to discover who they are, and what they inspire us to become ourselves.  I hope you will enjoy reading about Joni Mitchell, Maud Lewis, Dionne Brand, Marie-Louise Gay and Buffy Sainte-Marie. Their work enriches our lives.

Joni Mitchell (born in 1943) is a Canadian singer and song writer who has produced several albums, releasing her seventeenth (and last) in 2007.  The influences of folk, pop, rock, classical, and jazz styles can be heard in her music; her lyrics address broad topics ranging from environmental issues to her thoughts about love and womanhood. Mitchell has won nine Grammy awards and was inducted into the Rock and Roll Hall of Fame in 1997.  With a background in visual art, Mitchell designed most of her album covers; she currently devotes much time to her creative art. Selina Alko’s beautiful book – illustrated with vibrant colours and richly layered collages – is a biography of Joni Mitchell’s life. The story chronicles the early influence of art and music in Mitchell’s childhood, her development as a visual artist, poet and musician, and the launch of her distinguished career as a singer, song writer and music producer. Never constrained by one style, Joni Mitchell continuously experimented and evolved, touching the minds and hearts of listeners with her honest, vivid and poetic lyrics. 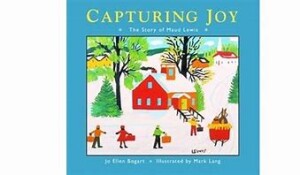 Scotia. Born with some physical challenges, over time she developed rheumatoid arthritis, which affected the mobility in her hands.  This did not stop her from creating numerous works of art. Her inspiration to paint came from many places – Christmas cards she had made in childhood, scenes from the early years of her life, her father’s work as a blacksmith, her love of animals, buggy rides with her family, fishing boats, scenery and even her husband Everett’s car. Because they were quite poor, Everett often collected scraps of wood and cardboard that she could use as a surface for painting, along with salvaged cans of discarded paint.  The artist even painted every available surface in her very small house, which after the deaths of Maud and Everett was restored and now can be visited at the Art Gallery of Nova Scotia, along with many of her artworks. Maud Lewis’ cheerful subject matter, bright and joyful colours, and the playful nature of her paintings are an inspiration to aspiring young artists to capture and express their own joy. 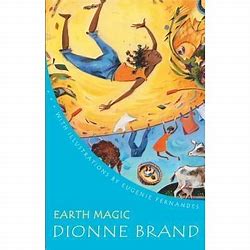 Born in Trinidad in 1953, Dionne Brand emigrated to Canada in 1970. She is a poet, novelist, academic and social activist. Brand was Toronto’s third Poet Laureate from September 2009 to November 2012, was admitted to the Order of Canada in 2017, and has won numerous prestigious awards and prizes for her writing. Earth Magic is her first book of poems for children. This 20-poem collection is inspired by her childhood in Trinidad and celebrates the lives of Caribbean people. Many topics are explored through the poems including: the time of day, activities like fishing and collecting bottles, nature and the weather, people you meet, places to visit like the market or the town. There is a more serious poem called ‘Slave Ship’ which invites children to reflect on social justice. Readers will enjoy these poems with all of their senses – feeling the movement and dance in the words, the heat of the day, taking in the aromas, hearing the voices and seeing the saturated colours, captured so beautifully in the sunny, vibrant paintings of Eugenie Fernandes.

“Books leave gestures in the body; a certain way of moving, of turning, a certain closing of the eyes, a way of leaving, hesitations. Books leave certain sounds, a certain pacing; mostly they leave the elusive, which is all the story. They leave much more than the words.” ~ Dionne Brand, A Map to the Door of No Return

Born in Quebec City (in 1952), Marie-Louise Gay has studied graphic art, animation and

illustration; starting in 1980 she began dedicating herself to writing and illustrating children’s picture books, creating beloved heroines like Stella.  She has won the Canada Council Children’s Literature Prize (in both the English and French language categories); additional awards for her books have included the Governor General’s Award for illustration and the Mr. Christie’s Book Award, among many others. An inquisitive person herself, Gay has enjoyed numerous school and library visits, and answered the questions of many inquisitive children. How many books do you make in one day? Where does a story start? Her book Any Questions? invites readers to understand her creative process, and even join her in making up a story about a shy young giant. With her playful illustrations, rendered in watercolor, pencil, pastels, and collage, she brings readers into the world of writing, with its challenges and the many directions it can take, showing children that they can be writers too. 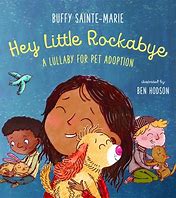 Buffy Sainte-Marie (born in 1941) is an Indigenous Canadian-American singer-songwriter, musician, composer, visual artist, and educator. Her work has focused on raising awareness of the issues concerning Indigenous peoples of the Americas. Sainte-Marie’s enormous talent is widely recognized, and she has won awards and honours for her music, and her work in social activism. In her new children’s book Hey Little Rockabye she turns her attention to the issues of animal rescue, shelters and pet adoption. With charming illustrations by Ben Hodson, the story is about a child who wants to adopt a pet, and uses many strategies to persuade her parents that it is important to do this because their lives will be made better by saving an animal’s life. The author shares photographs, and personal stories about the many pets she has adopted over the years. Sainte-Marie sang this song to many of them because of the special joy they gave her, and she includes in the book the words and music to Hey Little Rockabye so readers will be encouraged to sing to their pets too!

“Everybody’s creative. We create our songs and our paintings, our families and our children. Every one of us is on the cutting edge of the future.” ~ Buffy Sainte-Marie